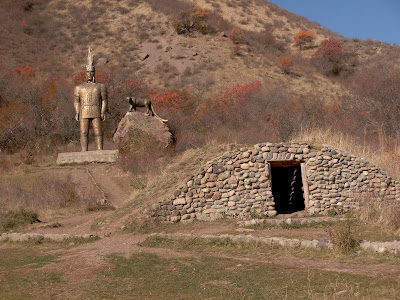 
In 1969, the Kazakh archeologists led by Kimal Akishev began excavating a huge mound, located 50 kilometers to the east of Almaty. Issyk barrow was part of a grand burial mound complex 45 earthen pyramids, strung out over a distance of three kilometers. The height of which is only 6 meters, compared with other15-meter pyramids, Issyk does not stand out.

Like other mounds, Issyk was robbed in ancient time. However, the robbers did not notice any side burial, in which lay the remains of a man, now known in the world of science as the «Golden Man of Issyk». Warrior buried in a mound was really gold. In the burial chamber, archaeologists found more than four thousands gold jewelry: jewelry items of clothing, headgear and footwear, rings, statues and plaques. On the floor were the vessels of wood, clay, bronze and silver.

And the location of objects, once adorned the front armor of a buried warrior, the remains of an iron sword and dagger allowed researchers to as result of hard work for the first time in science reconstruct the look of Sakas warrior.