Baikonur: From Kazakhstan's steppes to the space 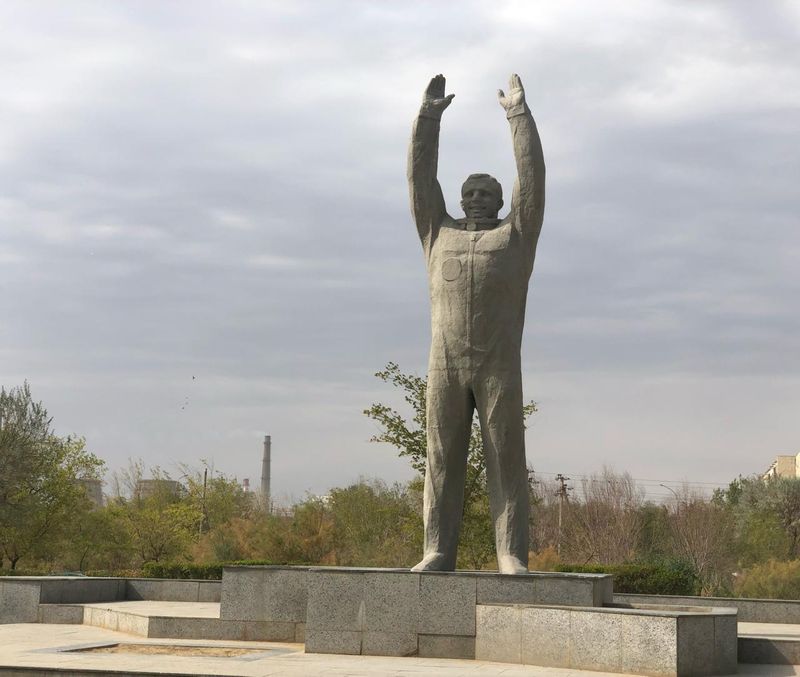 
Take a virtual visit to Baikonur, a city at the northern bank of the Syr Darya river

Everything in Baikonur city is about space and rockets. The city houses the Baikonur Cosmodrome from where Emirati astronaut Hazza Al Mansouri will be launched to space on September 25, to make history as the first Emirati in space.

Baikonur was once at the heart of the super-secretive space programme of the former Soviet Union. Now, the launch base of all Russian-manned space missions is situated in independent Kazakhstan. However, the Russian Federation rents and administers the 5500 square-kilometre cosmodrome territory.

The entrance to the city is guarded by military personnel who thoroughly check cars passing.

The quiet city in Kazakhstan on the northern bank of the Syr Darya river boasts of its significant space history in every few meters with monuments.

Just a 15-minutes walk away from the center of the city, children play underneath a huge model of the Soyuz rocket. Initially, this sample was used for tests and trainings at the cosmodrome, and when the model became obsolete, in 1981 it was decided to be established it in Baikonur to honor the 20th anniversary of the first flight of man to the space.

Close by is a huge statue of Yuri Gagarin the first person in space. Tourists take pictures in front of it with both arms raised high. It’s a tradition, said a local guide.

Gargarin lifted off from the Baikonur Cosmodrome on April 12, 1961 onboard the Vostok 1.

Interestingly, it was starting with Vostok 1 in April 1961, that the launch site was given this name to cause confusion and keep the location secret.

The original Baikonur was a small mining town 320 kilometres away from the present location.

A short walk away from Gargarin, on the Korolev Avenue, overlooking a square full of trees and gardens, sits the bust of Sergei Pavlovich Korolev, the man behind Sputnik 1, the first artificial satellite of the Earth that was launched from Baikonur on October 4, 1957. Korolev worked at Baikonur from its beginning in 1955.

There is also a tragic monument in the city, the Yangel. On 24 October, 1960 during tests of the missile R-16, a disorder in workflow caused the second level engine launch (bypassing first level operations) made the first level fuel tanks explode. Everyone in the radius of 50 meters died immediately.

No one speaks English here, but they all try to help with hand gestures. The Google Translate app or other translation apps come in handy. Taxi drivers and local guides will point you to a central market, a must see they tell you.

A small street market it has everything, from honey to spices, to you daily grocery.

With a warm smile 57-year-old Souleh, sells warm bread and bakery items, she smiles as she tries to speak into the phone while it translates how much the bread costs. “Spasibo” (pronounce spa-see-bah) we reply. It means "thank you,” in Russian.

The sales people still prefer Russian Rubles over Khazak Tenge. Locals carry their shopping bags around because plastic bags don’t seem to be used much. If you need one, you will have to buy it for around 10 Rubles.

You can’t help but notice that though there are no cleaners on the roads, the city is so clean.

The weather in Baikonur, which in old Russian means 'Star City’ has turned colder as October nears. In three days, the Soyuz MS-15 spacecraft will be launched from the Cosmodrome. And once more, a space vehicle will make its way from the Khazak steppes to space.